Address:
Morgan leads all transitional support and co-curricular education for international students. He supervises TCET which advises all students in the College of Letters & Science. He also oversees International Student Orientation and all transition programming for ISS. 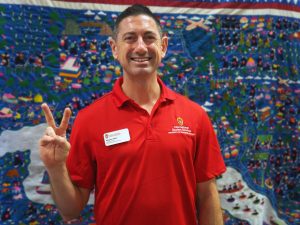 Morgan grew up in Mariposa (Spanish for “butterfly”), a small town in California’s Sierra Nevada Mountains near beautiful Yosemite National Park. He received his Bachelor’s degree from Lewis & Clark College in Portland, Oregon where he studied International Affairs and Communications and spent a semester abroad studying Italian and fine arts in Siena, Italy. His other international experiences include a Peace Corps service in Ecuador and an eight-year career teaching English as a foreign language in Kagoshima Prefecture, Japan, his first five years with the Japan Exchange and Teaching (JET) Program. After returning from Japan, Morgan attended Middlebury Institute of International Studies (MIIS) in Monterey, California where he completed a Master’s degree in International Education Management. Prior to coming to UW-Madison, he worked in International Student and Scholar Services offices at UC Santa Cruz in California and Clemson University in South Carolina. Professionally, his passion is supporting international students in their transition to and from studying in the U.S. and creating meaningful opportunities for their intercultural sharing and learning along the way. Unprofessionally, his passion is playing and watching soccer, or what most of the world logically calls “football.” Morgan’s wife is Japanese and together they are trying to raise their two daughters bilingually and multiculturally. 日本の方や日本語のできる方、ぜひISSまで私に会いに来てくださいね!