No building on campus represents the mind, heart, and spirit of the University of Wisconsin-Madison better than the Armory and Gymnasium, commonly known as the “Old Red Gym.”

It was a “red letter day” for the University of Wisconsin when the Armory-Gymnasium on Langdon Street opened with a flourish in 1894.

“The new armory is a splendid structure, admirably adapted to the many requirements which will be made upon it, and worthy of the great state which has furnished it for its greatest educational institution,” the Wisconsin State Journal stated, as it joined the citizens of Madison in celebrating the May 24-25, 1894 event.

The Daily Cardinal predicted the program “will undoubtedly be recorded as most important in the university’s history.” Classes were canceled, and railroads offered reduced rates to those wishing to attend.

The need for the combination gymnasium and armory had been generated by requests from administration and students for better athletic facilities and the establishment of military training for male students. The castellated medieval fortress clearly expressed the armory’s military function. 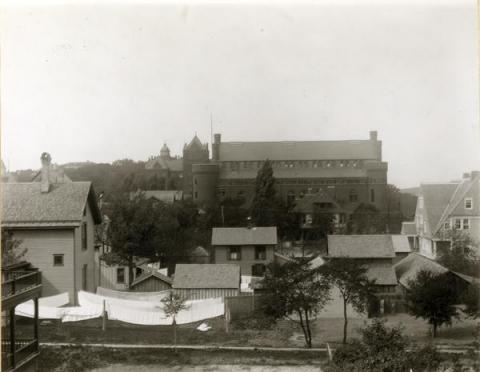 Construction began in July 1892. University President Charles K. Adams decided that the large Drill Hall on the second floor should also serve as a much-needed assembly space. When the building was opened in 1894, it was stated that the Drill Hall “forms one of the finest halls for dancing, drill, or auditorium purposes to be found in the west.”

A description published in the Cardinal at the time of the dedication explained the layout and intended uses for the building:

“The gymnasium covers a space of ground 196 feet in length and 106 feet in width. On the first floor on the west side are the commandant’s office, the artillery drill room and the bowling alleys. The office of the commandant is furnished with a fireproof safe for ammunition, etc., and is connected with the gun room on the floor above by a private staircase. The artillery drill room, which opens out of the office, has an unobstructed floor space and can also be used for classes in gymnastics or for a lecture room. On the other side of the building is the locker room which will contain, when completed, about 600 lockers. Back of this room are the bath and the dressing rooms. The center of this floor is occupied by a swimming tank, 80 by 20 feet, and varying in depth from 4 to 6 feet.”

“The second floor can be reached by six different stairways. At the front and the west side are the main stairways which are wide enough for the use of the battalion in column of fours. Then a staircase goes up from the east side of the building, near the dressing rooms, and there is the small one from the commandant’s office. The third floor, however, can only be reached by two stairways in the southeast and northwest towers. The drill hall, which occupies nearly the entire second floor, is 160 by 93 feet, and has a clear height of 43 feet. In front of the drill hall is the gun room and a visitors’ gallery, reached by the main staircase, extends along the front of the room.”

“The gymnasium proper, on the third floor, is 160 by 65 feet. A space in the center of the room where it is 26 feet high is enclosed in netting and used for a baseball cage. Outside of this cage the gymnastic apparatus, the rowing machines, etc., will be placed. On each side at a little lower level are two rifle ranges 160 feet long, and below on the outside is the running track of twelve laps to the mile. All of the available space in the building has been utilized. In the corner towers are several small rooms which can be used for offices, committee rooms, etc.”

The 1895 catalog of courses claimed that the “gymnasium in its equipment is not surpassed by any in the West, and in size, it is absolutely the largest in the United States

From the very beginning, the Red Gym was used for more than athletic and military functions. For many years, the gym was the center of university and city sporting, social, political, and cultural events. It was the site of occasional political gatherings, partly because it was for many years the largest space available in Madison.

The gym hosted championship basketball teams from 1911 until the Field House opened in 1930. The new fight song, “On, Wisconsin,” was performed here for the first time November 11, 1909, by its composer, William T. Purdy, at a mass meeting before the Minnesota football game.

The Badgers played their last basketball game at the gym on March 8, 1930.

While many activities moved elsewhere as the campus expanded, the gym took on a new task in 1928 as the last step in the registration for classes–a long-remembered role that endured nearly 60 years.